Using 4K on Laptop Screen? What is the Comfortable Screen Size for 4K Resolution?

4K. You may have heard of this Don several times even if you are not a technical person. The term was coined for non-technical people and is mostly associated with videos and TV.

W will not be talking about TVs, for the simplicity of this article, so I am assuming you are interested in knowing about 4K are you HD, what’s the benefit and whether or not is it usable on the small screen size of monitors.

Before we go further in the article, let me make a point for some people this title may seem misleading because there is no mac bake available with 4K for MacBook Pro’s screen as of now.

For how Apple is, for naming their devices and their features, and for the simplicity of the users, they call their Laptop’s monitors retina display.

The highest resolution available on MacBook Pro with retina screen is 1680×1050 when you select More space. But on the specs sheet, its actual decision is 2560×1600. Switch ResX, an application is discovered later, unlocks this resolution and many more resolutions. I used my MacBook Pro with 2560×1600 resolution, and you can see the screenshot of my desktop screen. It was barely useable. The text is too small. Someone with good eyesight could use the 1680×1050.

When using the 2048×1280 resolution also it a little too small for anyone’s liking, but I sometimes use it just for the benefit of getting more screen real estate. 2048×1280 is currently my default resolution (which can be attained using SwitchResX) which offers a little extra space.

Interestingly, SwitchResX office resolution higher then what is mentioned on the spec sheet. It is 3360×2100, which is undoubtedly uncomfortable to use on a 13.3-inch screen. Here is a screenshot below of my home screen. 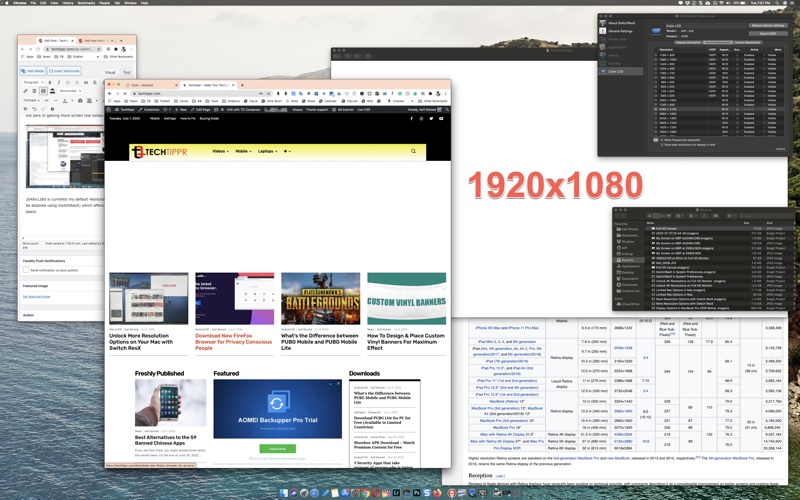 And surely, it is not 4K aa I mentioned in the headline of this article, but if a resolution slightly lower than 3840×2160, is not at all usable, 4K too won’t be.

The problem with 32-inch or bigger monitors is, these are Niche monitors, are have a more significant price tag in comparison to 21, 24, 27 monitors, which is a kind of standard.

I’ve already written an article about it which you can read here. In fact, I’ve used a 43-inch 4K TV as a PC Monitor.

It can surely be used as a PC monitor in some cases, like, for Productivity, video editing or work where you want to monitor a couple of windows opened in one view.

Two things, that you need to keep in mind is,

a) Response time. TVs don’t need short response time because of their use. But in PCs it’s crucial. My Monitor normal non-gaming monitor works well for me at 4ms response time, and my TV has 6ms, which also did not give me any issues. I will be a problem if response time is 12ms-15ms.

Technicalities aside, 4K display monitor as Computer looked pretty much like Full HD on 24-inch. But the issue is, a 43-inch monitor is little too big on the desktop. It gives neck cramps while looking at the extreme corners of the monitors since it’s too wide.

It would be comfortable if you are more than 3ft away from it. My distance from my secondary monitor is just over 2 ft, and I think the 32-inch monitor is the best fit for it.